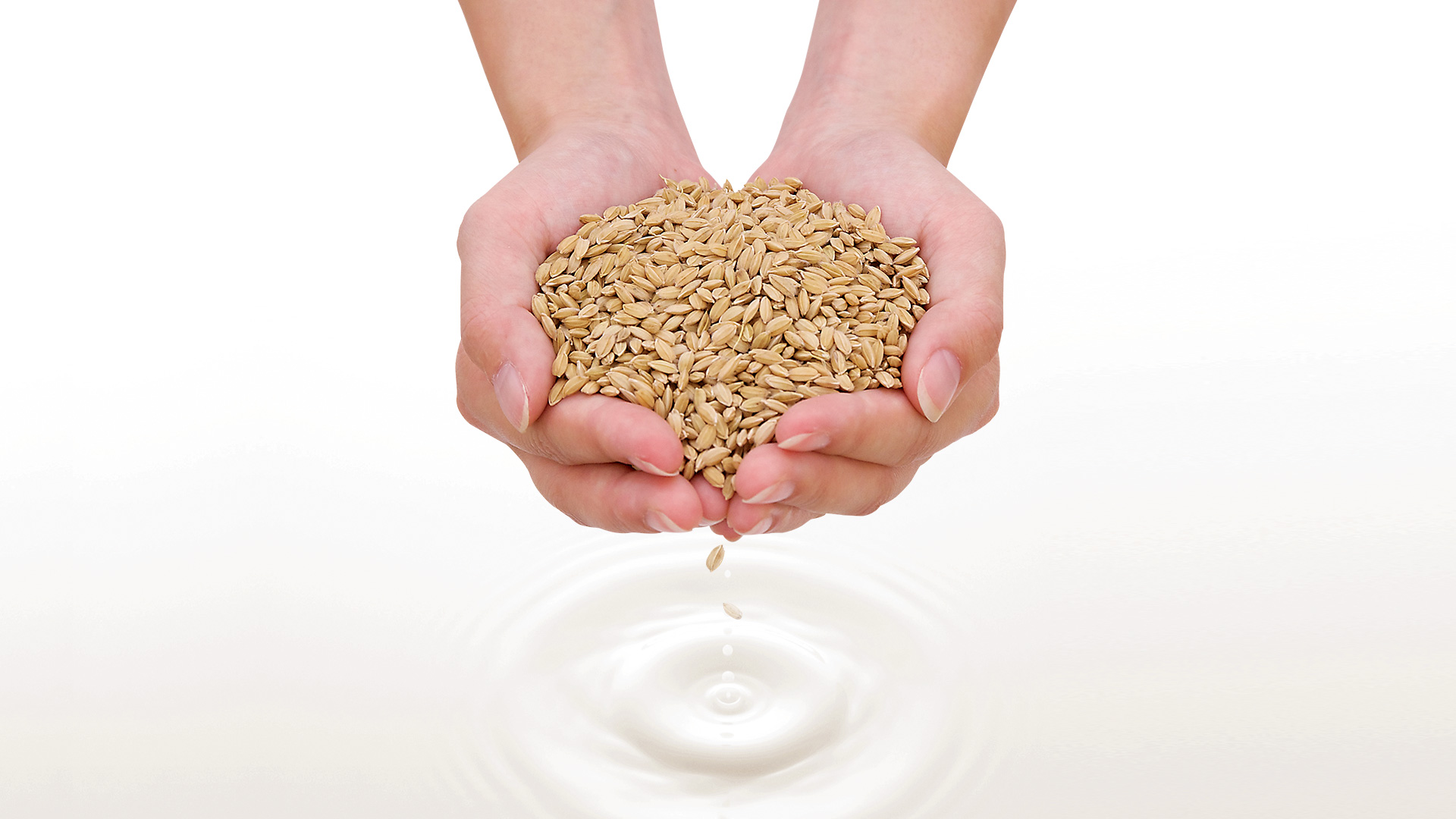 Commonly known as “amazake” in Japan, this drink has been loved by the Japanese since ancient times. It is a healthy drink with more than 1300 years of history, its origins said to be described in the Japanese historical chronicles “Nihon shoki” written in A.D. 720.

It is said that the drink was cooled and drunk among noble classes in the midsummer during the Heian period around 1000 years ago. As time progressed, it spread to the general public and was frequently sold in summer as a “nutritious drink” for the masses during the Edo period roughly 300 years ago. As a means of promoting public health, the Edo Shogunate of the time adopted a policy of setting a price that anyone could afford. It is said that some members of the samurai class also produced and sold the drink as a side job. Thus, in an era with little sweeteners, its ability to provide nourishment with a delicate sweetness made it an extremely popular drink.

In the current health-conscious boom, it has started to draw attention again, and is especially popular amongst young women concerned about “beauty” and “health”.

Although some are made using alcohol-containing sake lees, this product is mostly a nonalcoholic drink fermented by rice malt.

Nutritious fermented foods
made from nature, using only the
“rice”, “water”, and “rice malt”
passed down by our ancestors
throughout the generations.

It contains many of the same nutrients as an “IV drip”, hence the name “drinkable IV drip”. The drink is suitable as a nutritional supplement, containing glucose, B-complex vitamins, essential amino acids and other nutrients required for our body. It can be trusted to help prevent colds in winter, and act as a measure against heat fatigue in summer. Since it is rich in B-complex vitamins, which help to efficiently convert other nutrients into energy, it supports nutrition in the body. At the same time, the large amount of glucose supports recovery from fatigue. In addition, its easily drinkable form makes it effective in providing nutrition during times of poor appetite, rushed mornings, or when meals cannot be taken postpartum. Furthermore, since oligosaccharide and dietary fiber increase the good bacteria in intestines and strengthen the immune system, drinking it on a regular basis helps build a healthy body.

The large amount of glucose in the drink raises the blood sugar level, providing a feeling of fullness. Having it before a meal can therefore help prevent overeating. In addition, it is said that B-complex vitamins facilitates fat burning by stimulating the metabolism of fats.

It is a product so abundant in nutrition
that it is sometimes referred to as a drinkable
“IV drip” or “beauty lotion”.

How to make “Rice Koji Beverage”

Using a patented method, the rice dirt and rice bran are instantaneously removed, and the heat-resistant bacteria attached to the rice are also eliminated (official inspection completed). After being wrapped in jet air bubbles and isolated, the separated dirt and bran are promptly ejected using the cyclone effect, so there’s no chance they will reattach. With the cushioning effect of air bubbles, the rice is washed undamaged grain by grain.

Rice is not steamed using steam from a pressure boiler, but from freshly boiled water. Furthermore, the rice is only steamed after a certain pressure is reached so that it maintains springiness like an “earlobe.” In this way, every grain undergoes pressure and will not end up syrupy at the end.

3.Put in the rice malt and ferment it.

Put water and rice malt into the steamed rice, and let it rest for 24 hours. Since fermentation will stop over a certain temperature, the temperature needs to be carefully controlled. Using this temperature control, the rice malt will draw out the rice’s maximum natural sweetness, adjusting it to the right amount with some sharpness, which is a sugar content of over 20 degrees similar to fruits.

If sterilization is imperfect, alcohol may develop through active bacteria, or acidity may come through in the taste. Microorganisms are therefore sterilized using a slightly low temperature of 85 degrees for 40 minutes.

Temperature and sugar content are controlled throughout the day,
spreading the rice out equally by stirring the iron pot.

We adhere to the traditional way of production by hand,
and work carefully to bring out a satisfying taste.

What is rice malt?

Rice is covered with aspergillus to make rice malt.
Because there will be a smell if temperature control is not done properly,
high quality koji is made by skilled workers who meticulously control the temperature. 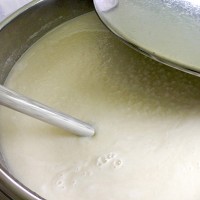 We added (+) popular green tea to the natural sweetness. 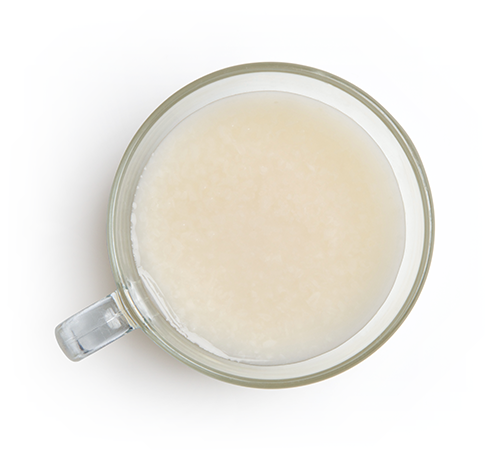 The delicate and refreshing sweetness from rice is distinct. It is a nostalgic taste for the “Japanese”, made using a traditional process without adding one bit of sugar or salt. 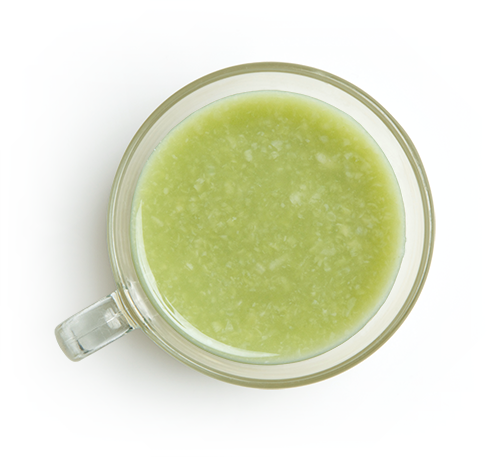 We added Japanese green tea. The sweetness of Rice Koji Beverage and the flavor of fresh green tea are exquisite tastes. It is said that green tea has a relaxing effect which helps to provide rest. 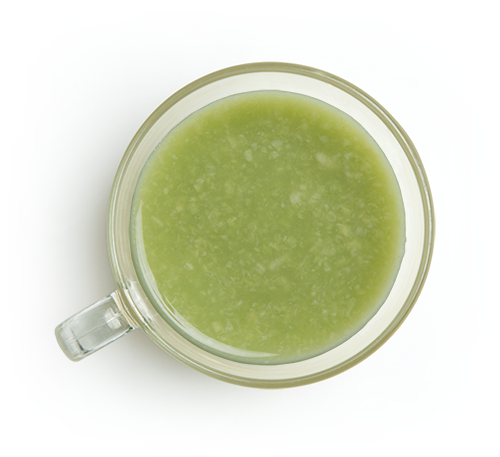 We added the powdered green tea from Yame, Fukuoka Prefecture. It goes well with the sweetness of Rice Koji Beverage and tastes like cafe latte. A bonus point is that it is also rich in catechin, which has excellent antioxidant functions.

We added (+) popular natural ingredients to the natural sweetness. 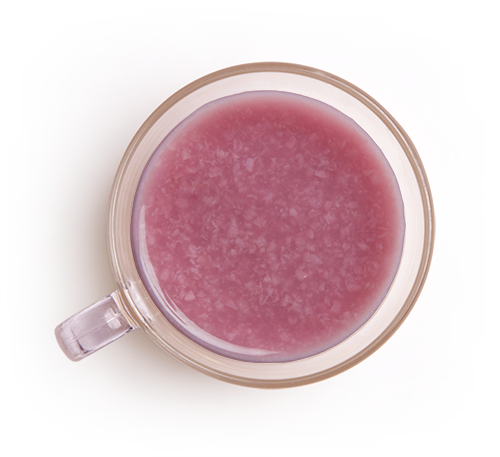 We added purple sweet potatoes full of dietary fiber from Kagoshima Prefecture. It is rich in polyphenol, which has antioxidant functions, and is said to be good for anti-aging and preventing lifestyle diseases. 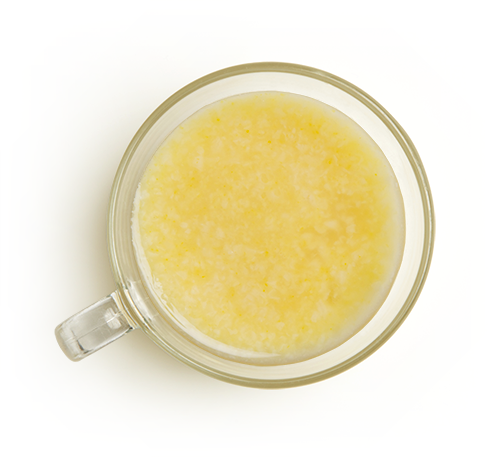 We added pumpkins from Kagoshima Prefecture. It is a vegetable rich in beta carotene, which is a hot topic in health and beauty. Furthermore, we have given it some spice by adding a little cinnamon. 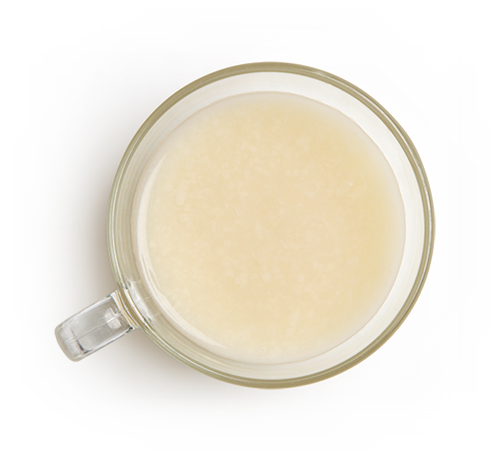 We added rich-flavored ginger from Kagoshima Prefecture. Since ginger warms the stomach, it is the optimal spice for those sensitive to the cold. We recommend this flavor to those who don’t like the taste of rice.

The production of a traditional brewery, founded 140 years ago

Kurauchido was founded in A.D. 1876 (Meiji 9), and has around 140 years of history.
It established a brewing method which suited the soft water of Chikugo, and the flavor of its sake, which is as good quality as Nada’s, is loved as a man’s drink. Chikugo River, with sources from the Kuju and Aso mountains, is the longest river in Kyushu. The area along this river is said to be one of the three biggest sake areas in Japan, and the fine tastes and aromas are praised.
At Kurauchido, sake is brewed manually using the craftsmen’s intuition, even in an era where mass production and cost reduction through machines are the norm.

In particular, we have obtained high ratings for the brewery’s masterpiece, ginjo-shu (quality sake brewed from the finest rice), and have repeatedly won gold at the Japan New Brewing Awards.
The craftsmen of Kurauchido have inherited traditional techniques passed down through the generations, and even now still engage in brewing sake the traditional way. However, in order to pursue the potentials of sake, the chief sake brewer and young craftsmen have also embarked on new challenges.
Together with passing down to future sake brewing the spirit and technique we have forged and polished within this long history and tradition, we aim to be a brewery that leaves a lasting flavor and impression. 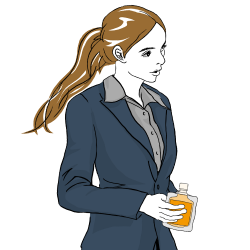 It can conveniently provide nutrition when there’s no time for breakfast in the mornings or for lunch at work. Being made of rice, it is moderately filling and can be utilized in various business situations, in and out of the office. 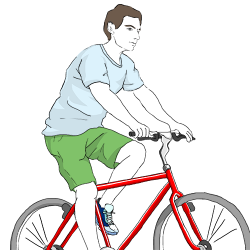 Recovery from fatigue during sports

It can be used to quickly recover physical strength spent at sport or work, or during times of poor appetite or sickness. 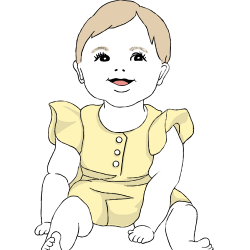 As a baby or nursing food

Since it contains no food additives, it can be safely given to babies and children. And because it is easy to digest, it can also be used as a nursing food. 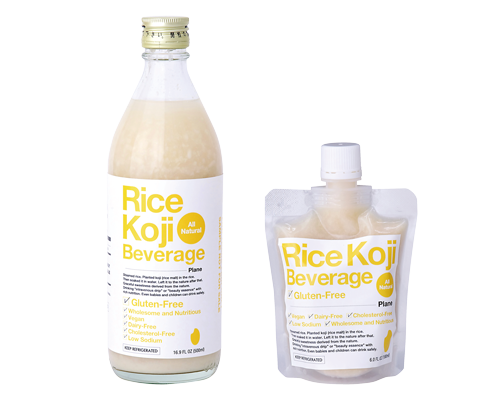 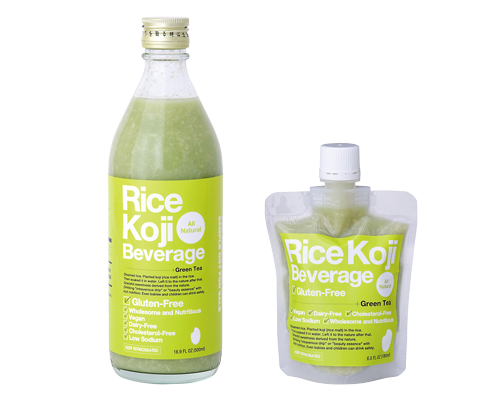 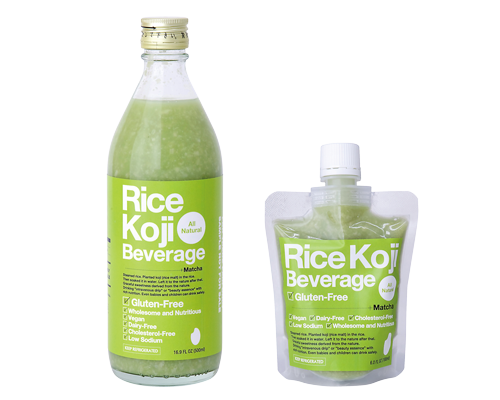 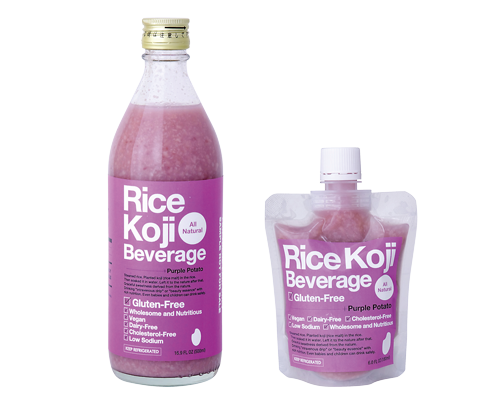 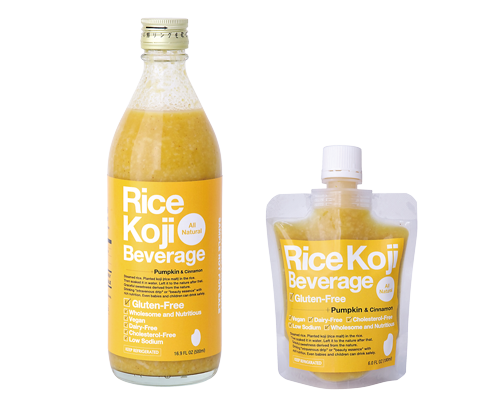 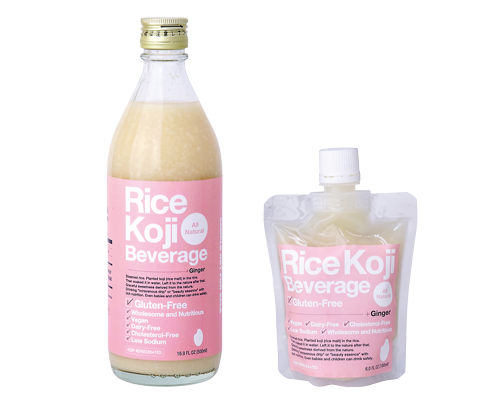 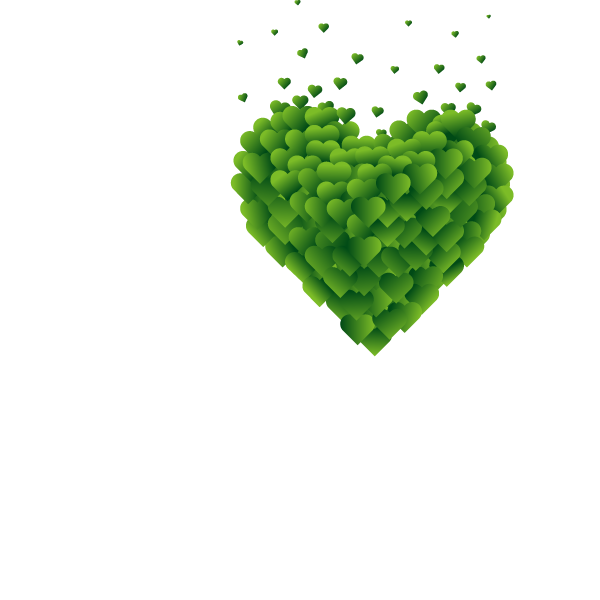 Traditional beauty with 800 years of history

Exquisite matcha beer
can be recommended for dad

The history of matcha (powdered green tea) is long as it’s a traditional material representing Japan passed down from the Kamakura period 800 years ago. Since the powdered tea leaves are consumed as they are unlike other teas which are normally brewed, they are outstanding supplements, which enable you to get the nature’s blessings of the whole ingredients of tea leaves. In fact, matcha is full of beauty ingredients. It is a material for people today to take in just now to maintain their beauty and health. If you can take in such matcha deliciously and easily regardless of its form, you will come closer to beauty… Love Green is the item produced with such thoughts. It is a new proposal for beauty by taking in beauty ingredients in various pleasant ways, such as dishes and sweets, including matcha beer.

step.01
Have two beer glasses ready.
step.02
Put the recommended amount (it is 1g [about one teaspoon] to 350 ml) of the matcha beer mix into a glass of the two, and pour out beer up to about one fifth of a glass.
step.03
Mix it with a muddler until matcha melts fully.
step.04
Fill another glass with beer up to about four fifth.
step.05
Pour the beer with melted matcha into the second glass. In order not to mix it with bubbles, pour it around the center of the glass.
step.06
Stir it lightly with a muddler and mix it well. Then, delicious matcha beer is completed. Please adjust the thickness according to your taste on the basis of the recommended amount.

Plenty of ingreadients
effective for beauty and health!
Power of “matcha,
” beauty material of Japanese tradition 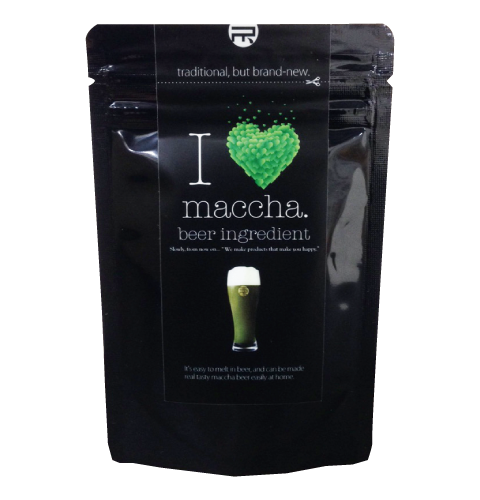 Storage condition
store in a cool, dry place away from direct sunlight and heat.
Please consume as soon as possible after opening.

Magic spell of bubbles casted by a ninja 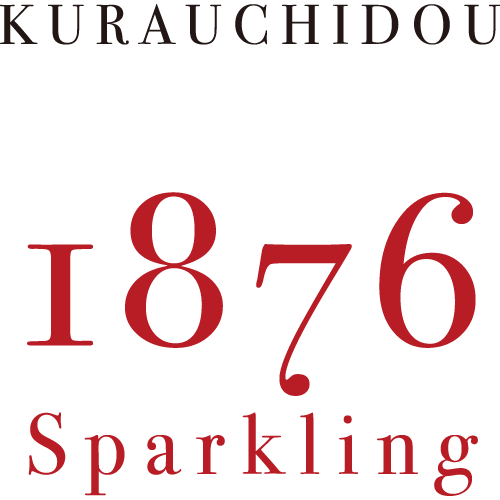 It tastes mild, but outstandingly crisp

Sake that makes a supreme accompaniment to Western cuisine

Sake that makes a supreme accompaniment to Western cuisine

It overturns the traditional image of sake; fruity but sharp semi-sparkling taste will give you a refreshing and exhilarating feeling.
It’s a sparkling sake that fizzes in your mouth and you can enjoy it casually like wine with your dishes.
Being brewed using Japanese rice and malted rice, it inherits the traditional flavor of Japanese sake yet represents a surprisingly clean aftertaste.
Japanese sake have been evolving its taste as the Japanese dishes change across the ages.
And now “Sparkling Sake” is born after we have pursued Japanese sake that also matches Western, Chinese, Italian food, etc.
We assure its clear taste will make your rich dinner time.. 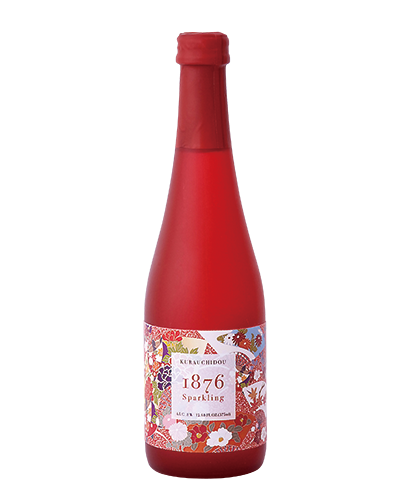 Live tastily, in body and mind

I realized it when I started bringing up my child.
That in this time and age, foods contain a surprising amount of additives.
That it is so hard to find food with few additives.
Our company was born from questionable food manufacturing processes that focus more on profit than safety.
Japan is home to many healthy and fine foods still unknown to most.
There are also new discoveries arising as traditional foods are rearranged in new, contemporary ways.
We are developing such products along with our sakagura (wine cellar), which boasts a history of over 100 years.
Our mission is to spread hometown tastes not only to the Japanese market, but throughout the world.
227-2 Kanegae.Okawa-city.Fukuoka.Japan,831-0008
TEL_+81-944-85-8188 FAX_+81-944-85-8166
info@puredrop.co.jp

We will join “The Winter Fancy Food Show”

We are looking forward to seeing you! 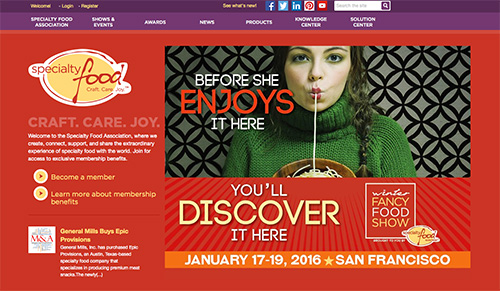 Please send us a message with the name of the product you would like to inquire about in the subject line.
As we are a small team, it may take a while, but we will reply to you as quickly as possible (excluding weekends and holidays).
You can contact us in English, Chinese and Japanese.